Windows 7 was the most popular desktop operating system in history. Then, Microsoft released Windows 8: it tried to force desktop users into a touch-friendly experience that didn't make much sense with a keyboard and a mouse. Windows 8.1 fixed a few of those problems, but the core issue remained: most people use Windows on a desktop computer or laptop, so millions downgraded back to Windows 7.

Microsoft fixed that with Windows 10: you still have multiple operating systems built into one, but each experience will be optimized for the type of PC or device you are using at the moment. The exact same version of Windows 10 can switch from a mobile OS to a desktop OS just by plugging a monitor into your cell phone running Windows 10, for example (Microsoft calls this feature "Continuum").

Windows 10 retains much of the look of Windows 8, but brings back the start menu, just like Windows 7: but you'll gain "live tiles", just like the ones on the Windows 8 Start Screen (pictured left), in your start menu - best of both worlds! The Windows 8 start screen is disabled by default, but can be re-enabled, as you'll learn in a later tutorial.

From different versions of Windows, to specific editions, learn how you can upgrade to Windows 10, from what you have to the edition you want, with brief pricing overview.

If you are upgrading from Windows 7, there will be a few surprises: for starters, gone is -unfortunately- the Aero experience (that's the transparent glass, thick / 3D windows with translucent glass effects). Most themes are simple, if not plain, and more reminiscent of the "Windows Classic" theme than - it's the new flat design, that Microsoft initially called "metro", and later "modern". Notice the screenshot: it shows the top right corner of a Windows Explorer window - all square and flat.

For full Aero, there's no choice initially in Windows 10; but, since Microsoft offers a free upgrade to Windows 10 from Windows 8 and Windows 7 for the first year, it's probably going to become the most popular version of Windows. As such, third-party developers will create "shell extensions" - the ability to customize the look-and-feel of the operating system. Pictured on the right is the gorgeous "Aero Glass" customization pack for Windows 8 / 8.1 - a simple gradient makes all the difference in the world :) 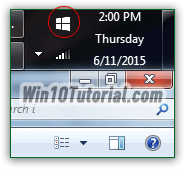 If you're running an older version of Windows (like Windows XP or Vista), you might still be able to update to Windows 10, if your hardware supports it. As things stand, the price will range from $119 US for Windows 10 Home Edition, all the way to $199 US for Windows 10 Pro (Professional Edition) - see "Windows 10 Price and Upgrade Cost". Or read more about the differences between Windows 10 editions.

Shown on the screenshot is the Windows 10 icon in the Windows 7 notification area (system tray), offering to reserve one's spot to get Windows 10 for free. That's probably just a marketing strategy to create the perception of scarcity since, as far as we know, there is no limit to the number of users who will benefit from this feature - as long as you request ("reserve") your upgrade within a year of launch.

Here are a few noteworthy features if you come from Windows 7: in addition to Internet Explorer 12 (included for backward-compatibility), Windows 10 comes with a brand new web browser Microsoft calls "Edge". In early tests, it supports nearly all web standards, and is extremely fast (even faster than Google Chrome in many cases).

Microsoft finally brings workspaces to Windows: this feature has existed for years in Mac OS X and various Linux distributions, and was previously only available through third-party apps on Windows. Workspaces allow you to have multiple, virtual desktops: this is a great way to separate your work. If you have over 4-5 programs running at the same time, using Alt+Tab to switch between them quickly becomes cumbersome. With workspaces, you can limit the number of applications by grouping the related ones in a single workspace: if you've dedicated a workspace to writing a paper, you can have Word and a dictionary app, for example, running in that workspace. No need to see Facebook or Outlook in the Alt+Tab for that productive workspace! ("Task View" is a visual way of displaying and letting you switch between workspaces.)

If you are accustomed to using Siri on your iOS device (iPhone / iPod touch / iPad), or "Google Now" on your Android phone or tablet, you'll welcome the introduction of "Cortana", Microsoft's version of the robotic virtual assistant like Siri. Since Windows 10 is designed to run the same -albeit adaptive- version of the operating system on all your devices (desktop PCs, laptop computers, tablets, and smartphones), you can plug a monitor into your Windows 10 phone, and you'll end up running the full desktop version of Windows 10 - the feature called "Continuum".

And each version of Windows is more secure than the previous. As an example, Windows 10 introduces a new way to reset or refresh your PC. That's not the same as system restore points: it's more like the feature that most PC manufacturer include, which lets you restore a clean copy of Windows. Final note and reminder: don't worry about purchasing right now a new computer: for one year, you'll be able to upgrade to Windows 10 for free, as long as that computer is running Windows 7 or Windows 8 / 8.1, and as long as your hardware supports Windows 10 (any recent computer will do!)